It's hard to believe that in just a little over six weeks, Ashlynn will be here!  This pregnancy is still going great!  For the most part, things with Ashlynn have been pretty similar to things with Emily.  The biggest difference I have noticed is that Ashlynn tends to move much more than Emily did.  According to my doctor, that is due to the fact that with Emily my placenta was on the front, whereas this time it is on the back.  Because of that, Ashlynn is right up against the outside of my tummy which makes it easier to feel her.  I am thankful for that, because lack of movement was something I remember constantly worrying about with Emily.  Another minor difference is that so far I have had no blood pressure issues (which I had already begun to have at this point with Emily) and no real swelling to speak of.  I believe both of these are due mostly to me having been much more active this pregnancy.  I've been doing Jazzercise three days most weeks, whereas with Emily I really wasn't doing anything.  I have gained a little bit more weight at this point with Ashlynn than I had with Emily, but it's pretty minimal.  I am so thankful for another healthy pregnancy.  We are almost to 32 weeks and have the birth scheduled for August 9 at 7:30 am unless she decides to come sooner!  We love you little Ashlynn Kate and we can't wait to meet you!
Posted by Jennifer at 11:59 AM 1 comment:

Show Us Your Singles Link Up!

I've been reading Kelly's Korner for years and after seeing the awesome stories of singles finding each other through Show Us Your Singles.  I finally decided to take the plunge this time and write about one of my very favorite singles, my cousin Krystal! 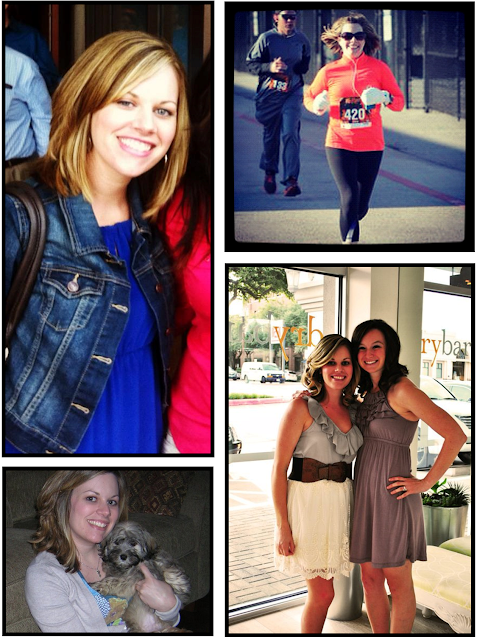 Krystal is almost 27 years old, from the Dallas/Fort Worth area.  She grew up in Euless and now lives in Bedford.  First and foremost, Krystal is a follower of Jesus whose faith is the most important thing in her life.  She comes from a very loving and stable family with parents that have been married for over 30 years.  She has one older brother and a sister-in-law, with one nephew and another soon to be born.

Krystal graduated from college at a Christian university in Abilene and now works as an oncology nurse in the Fort Worth area.  She is an absolutely beautiful girl and lives a very active life, running and doing Cross-Fit.  She loves cooking, traveling, her job, her friends, and spending time out and about in the DFW area.

I know there is plenty I am leaving out, but I wanted to make this short and sweet.  Krystal truly is one of the sweetest, most genuine people I know and that's not just because she's my cousin!  Also, she didn't ask me to do this.  It was all on my own!  If you are a interested in meeting Krystal, please leave a comment here with your email address and I will see that Krystal gets it!  Christian men, only, please!
Posted by Jennifer at 7:29 PM 1 comment: 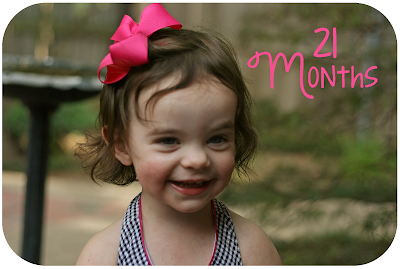 It's hard to believe two more months have passed with our sweet little Emily.  I know I am biased, but she is nothing short of amazing.  She's this huge personality in a tiny little package.  Emily is sweet, silly, loving, strong-willed, independent, smart, social, and happy happy happy.  Of course she has her really stinkerish moments, but what almost two year-old doesn't?  Her favorite thing to do that drives us crazy is run on the couch.  We're still trying to figure out a discipline that works for that one.  Can't exactly remove the couch or the child from the room.  She is still tall and thin, but we're starting to see a little more chub on her.  During her 20th month, she went through a week or so where she wasn't too interested in eating, but she's eating really well again these days.  She loves to eat Honey Nut Cheerios with milk and a banana for breakfast.  On Fridays, Daddy makes pancakes (or "cakes" as Emmy calls them) and she loves those as well.  She also loves macaroni and cheese, grilled cheese sandwiches, pizza, and chicken nuggets from Chick-fil-a.  She loves fruits and swings back and forth on which veggies she likes.  Typically she likes broccoli, carrots, corn, and green beans, but some days she will refuse what was her favorite the day before.  She has also begun LOVING Mexican rice.

The biggest development these past couple of months has been her verbal skills.  I can't believe she is talking as much as she is!  Just a couple days ago, she said her longest sentence to date- "I go under my mommy's legs."  Typically she said lots of three and four word sentences, so we were very impressed with six words!  This month she has started saying I love you ("Luh loo Mommy.")  All of her Ws come out as Ys.  She loves to drink "yater" and milk, but not juice.  She says "Nanks" and "Yelcome" for "Thank you" and "You're Welcome."  She repeats most of what we say and it's always surprising to see what she is going to come up with next.  We never know what she is going to say.  She knows so much more than we realize.  She can count from one to eight, skipping four.  I don't know where she learned it, because I didn't teach her!  She is also learning her colors and consistently gets pink, blue, and red correct.  Green and yellow are right about half of the time.  She loves to sing and can tackle almost all of "Twinkle Twinkle Little Star."  She also likes to sing "Jesus Loves Emmy" and has recently begun trying to sing parts of the ABCs.  I continue to be impressed with what she picks up without us having intentionally taught her.  She loves the Bible.  They each have their own in Sunday School and when it is time to put them away, she never wants to let go.  At home, any small book is deemed a Bible and she likes to sit and flip through the pages.

Emily is a great sleeper, but had an off week during month 20.  Fortunately, we are back to normal.  At this point in time, we only use the paci during naps and at night.  Hopefully this will be diminishing soon.  Recently she has started asking for covers when she sleeps.  She also likes to carry the covers around in the house, but isn't attached to a particular blanket.  She will take anything.  We had our last day of MDO on Thursday, but she will be starting the summer program on June 4th.  She will go two days a week instead of just one so we can keep her in the groove of school and not upset her by giving her the summer off, then sending her away two days a week after Ashlynn arrives.

Emily is FEARLESS!  I am ready for her to learn a little bit of healthy fear.  :)  She feels safe wherever she is for the most part and has been known to take off running if I don't have her hand.  Every once in awhile she pretends to be shy around new people...or even certain familiar people...but it is all an act.  This little girl is NOT shy.  She is very opinionated and likes to say "no" quite a bit.  In short, she is our precious perfect darling angel baby.  I am really going to treasure these next couple of months with just the two of us at home.

Emily, you are my love, my angel, and my little best friend!  I love spending my days with you and watching you grow.  I can't wait to see what God is going to do in your life!  Love you more than life!